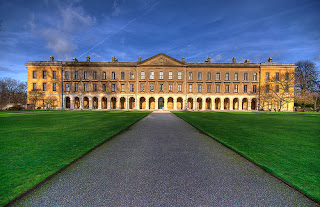 Last week I found this article via twitter that gathered the opinions of a variety of people (including one of the Muppets). They were all asked what the one tangible idea about education they felt was worth spreading. Their answers were interesting to read and ranged from removing homework, to differentiation, to teacher training to university graduation.

The university opinion stuck in my mind for a couple of reasons - (i) I believe that this has a 'tail wags the dog' effect on education where many reform movements get stifled by the time they reach the stage of higher education because of the requirements to enter places such as Universities. If students need to be ranked in order to get into these places then society has generally fallen back on the only way they know how to do this - through summative testing. There seems to be a slow push towards a more formative approach over the past 10 years (give or take) with some education systems placing greater emphasis on the year (or in some cases years) long work of students. Some higher education institutions also now place greater value on 'non-academic' (for use of a better word at 6am in the morning!) entrance qualifications, such as service programs. Others are moving away from exam-based entrance results, preferring to observe a larger snapshot of student work through alternative reporting tools, such as portfolios. This is generally a positive move in my opinion.
(ii) I read a post just this morning on a friends blog where she talked about a university revolution - where universities face transformations over the next 20 years. You can read more about it here.

Have a read through the list of ideas here and see which ones interest you the most. Whichever you choose, it appears that we are approaching or are already in a renaissance period of education, where interest is renewed and many ideas are generated. These periods can be confusing for education practitioners due to the large amounts of new information available to them. They have to decide where they lie in terms of these new perspectives and practices. But it is not only teachers - and this is what makes it so difficult. If there is an Art renaissance then the artists themselves are redefining what art means and the consumers do just that - consume. This has an affect on the period at the time but doesn't really impact on those people's (the consumers) day to day lives. But in education our students aren't merely consumers - they are active builders of the renaissance. What happens every day can affect them for their entire life. They have years to experience the development of Impressionism but they only get one year of Grade Five. So we have to remind ourselves that we're not only going through these changes ourselves, but that our actions also impact the lives of many students, parents, friends - and everyone has an opinion.

So renaissance periods can be difficult times. But they're also very exciting.

Photo Credit: Prabhu B Doss via Compfight cc
Posted by Dave at 6:57 AM No comments:

Email ThisBlogThis!Share to TwitterShare to FacebookShare to Pinterest
Labels: assessment, Teaching and Learning 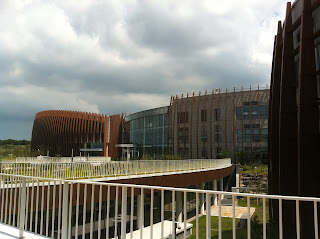 Today was the first day with students at my new school - Branksome Hall Asia. This photo was taken just as I walked out of the Upper Junior School Pod, looking back to the School Centre with the Performing Arts building on the left. We spent the day interviewing all returning and new students. This gave them the chance to get to know me a little bit, me the chance to get to know them a little bit, and also for the parents and I to meet. This is especially important for our residence students as their parents will leave tonight back to their homes in other parts of the world. While its been a busy two weeks here its also been reasonably casual - I certainly can't recall a calmer start to a school year for me personally. This is partly due to the way that JoAn (our Principal) has organised the induction and collaborative weeks, and also partly due to the fact that we are only in our second year as a school so there are some things that are not set up that we don't have to worry about yet. That said, its going to be a very busy year as we prepare for PYP and MYP accreditation in October, following our confirmation last year as an IB World school. We'll also be charged with developing planners, setting up routines and structures and also working to establish a culture that best enables us to deliver the program to our students.

Although I signed with BHA in January, I've been keeping abreast of the school's updates over the last six months. We had a smooth arrival to Jeju and have settled into our new house comfortably. The usual induction week activities (setting up bank accounts, internet, photos etc) were interjected with a couple of bright spot moments:

(1) Service learning & Inclusion: I'll admit that when I signed on one thing that concerned me about the school is that it will essentially be an educational opportunity for the rich. This is true, in part, but the school recognises this and one their school goals this year is to develop a service learning culture. Our Director, Peter Kenny, spoke to the staff and reiterated that a culture of service has to develop from within the attitudes of the student body itself. He said that it must be reflective and also must involve some form of action. I noticed his referral to the core elements of the PYP. To help foster this attitude, the school offers scholarships to Korean students who would otherwise be unable to attend BHA. In a breakout session with JoAn she spoke about Hart's ladder of participation and after our discussions we were given time in our grade teams to plan for action in our first UOI. This was a very effective way of getting us to explicitly plan for one of the five key elements. She had also used the same technique in a session the day prior when we'd discussed concept based learning. The article about participation cam from a book called 'Educating the Global Citizen' which I'm keen to get hold of. This session in particular helped us as a staff to understand ways that we could foster action and participation with our students. Certainly in my own practice I've often expected that action should come solely from the students and that if it didn't happen then there wasn't much that I could do about it. I've now been thinking of possible ways that I can model and engage the students in action from the start of the year. This will hopefully help to encourage them to take their own action as the year progresses.

(2) Doing things differently - In the introduction for the new staff only, and again once the existing faculty returned, we were all told that the leadership of the school has full faith in us as practitioners. We were told that the school wants to live its vision of being the 'pre-eminent educational community of globally minded learners and leaders'. To this end we were told that, although we are aligned with our philosophical beliefs of the IB, we were encouraged and expected to do things 'a little differently'. This means taking risks, learning from failures and supporting each other in our initiatives. Glen Radojkovich, our Head of school & his wife, JoAn, both mentioned this next part on different occasions without knowing that the other had said it. It was certainly inspiring to hear the same clear message from our leaders.

(3) The Learner Profile - Another things that was mentioned on the very first session of the very first day was the  importance of the Learner Profile and how it is central to everything we do in this school. This was especially good to hear after working in schools who's standard line were 'we aren't an IB school, we're a school that offers the IB'. The current staff here are a mixture of nationalities, some having experience in other International Schools and others coming directly from their home countries. The important thing about them all, however, is that no matter where they come from, they're all willing to try and learn about the PYP and try new things out - not just bring their 'suitcase curriculum' with them.

I'm very excited to get started with all of the students tomorrow and am looking forward to testing myself, trying out new things and learning from my failures this year.