This morning my students tackled a problem that required them to use a variety of skills and processes they have recently been working with. You might be able to see in the picture below that they had to find a way to split up some distances of a relay race. The race was 26km long and they could choose as many runners as they want as long as it was between 3 and 10 (including those numbers).


I encouraged them to start off by using one of their problem solving strategies - identifying the key words. 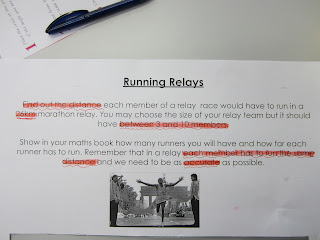 It was decided that the key information was:


The students then set to work with a partner in order to find out a possible answer for this problem. Although we have recently been investigating division, fractions and decimals, I didn't give any indication to the students that they might need to use these skills for this problem. I was interested to hear the some of the questions and comments that arose during their discussions:

The students used a variety of strategies to organise their thinking. Some created tables, some glued their work to their page so they could keep track of them and others cut out their sheet to group the kms together. 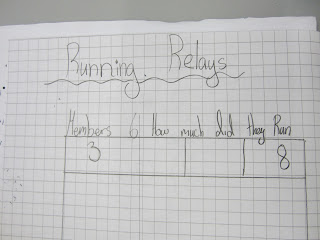 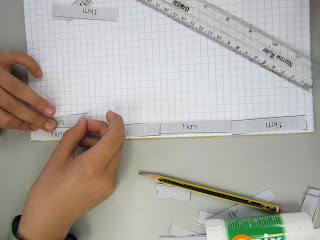 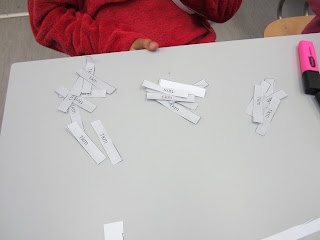 From here, some students became stuck and needed some thinking time in order to go any further. A popular strategy was to try and add more kms onto the race in order to make the groups fit exactly with their chosen number of runners. Others started to make some connections between what they had learned previously and  where they could go next:

These statements kicked the investigation up a level. Students realised that it didn't have to divide by 26 equally in order to work and began exploring the possibilities. Before too long we had solutions using 3, 4 and 6 runners. These groups organised their leftovers into fractions and distributed them accordingly so that each runner ran the same distance each. In order to achieve the accuracy component of the lesson, I challenged some of the groups to explore ways that they could convert their fractions into decimals so that the runners would know exactly how far they would have to run.

We finished up by discussing why each group could calculate a different answer. One of the understanding goals for this unit of work is that students can see that all numbers can be broken up into smaller amounts, and that this can be done through many different strategies. Today allowed them to use their knowledge of fractions, decimals and/or division strategies. It was good to see that the students are well on their way down the track with this. It was also a good opportunity to see the students bring their problem solving strategies into play and gain more experience working collaboratively with their peers.
Posted by Dave at 2:33 AM