A Skype call is a learning call....supercharged 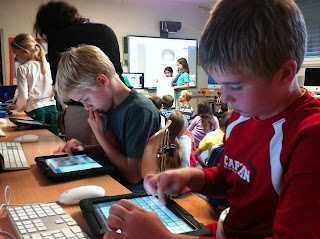 Today in Grade Three my students and the students from another class skyped with Kenn Nesbitt, poet and author. The teachers have organised this for the two years prior to this - he's quite engaging and relates well to the students. If you'd like to read more about this then check out the posts by one of our previous ICT teachers summarising the process here and here. I've used the word 'supercharged' in this post title because this year the students in my class added a few extra elements to the process.

Each year the classes have skyped with Kenn they've researched about him beforehand, used google maps to see where he lives. After that they skype with him and generally complete some sort of class reflection. We've completed all of this again over the past couple of days and today we added two additional things. Part of the pre-learning tasks involved working through what a skype call as a big group would look like. The students learned about where to look, that some people would have specific roles during the call, and some other general tips for the whole class. We also introduced live tweeting and blogging as part of the learning. If you look in the background of the cover photo you can see two of the bloggers, two of the question askers (in the background holding up a sheet to help each other read), and Kenn on the big screen.

We've used twitter on and off throughout the year so the students in my class are familiar with what it is. They're still getting to grips with the inner workings (re-tweets, follows etc) but they've been keen to learn about it. Some of my boys had their tweet re-tweeted by Zlatan Ibrahimovic earlier on in the year during our unit of inquiry about role models, which was really exciting for them! We had three designated tweeters that would provide live updates throughout the call. This served as a great resource to help the students re-connect their thinking after the call had finished and we were back up in our classroom. It also helped in the reflective process by reminding the students about some of the key messages. By tweeting they were also listening very carefully for the big ideas that they could take away about poetry and Kenn himself. Here's a couple of examples of their work:

We also had three students writing blog posts in real time as the call was happening. The bloggers were able to provide more background information about the call and expand on the ideas that they learned about as it was happening. Because we were using iPads for both tweeting and blogging, the students were able to easily take photos and upload them instantly to their posts. Check out an example of one of the posts here.

The call went very well. As I said before, Kenn was fantastic with the students so that obviously helped a lot. The students thrived using the technology and hopefully the other class that participated in the call with us saw how useful it could be (some teachers have been a tad skeptical about blogging and tweeting this year). There are definitely improvements that could be made though. Firstly, the iPads were ideal for this task and I'm glad we had the opportunity to use them. The Blogger app is also quite good, but you can't seem to edit things in HTML mode on the iPad like you can on the laptop or desktop. This meant that we couldn't re-size some of the photos that were too big on the post. I was surprised how frustrated this made some of the students - but we had given Kenn the links to our blogs so he could check out what they had written later on. I'm glad they care so much about how their work looks. Isn't it amazing what an authentic audience can do for kids!? I also think that I could have used twitter more effectively this year. We've used it as a questioning tool during our class and that has worked well. But we only follow a couple of accounts so we're not connecting with other learners as much as we could be. This has been a big oversight on my part.

I'm moving school at the end fo this year but I hope the Grade Three classes continue to connect with people like Kenn. The students have really enjoyed the experience and have redefined their learning by using some of the technology we have available.
Posted by Dave at 4:11 AM

Email ThisBlogThis!Share to TwitterShare to FacebookShare to Pinterest
Labels: ICT/Web 2.0, Teaching and Learning