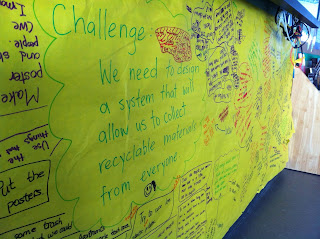 At the beginning of our school year here at BHA, our Elementary Principal spoke to us about the development of a service culture within our school. This is one of our school wide goals for the 2013/14 year so she wanted to give us the opportunity to work on some ideas before the students arrived. Seeing as we're in the PYP part of the IB, we figured that service would best be developed through the Action component of our units of inquiry.

Taking action can be a tricky element at times. Aside from the personal risks and challenges that someone must take in order to organise and implement meaningful action, there are also preconceptions from teachers to deal with. I bought one of these preconceptions with me. It's something that I'd never considered too much but now that I've had the opportunity to think through things in a more focused way, my understanding has moved to a new (hopefully better) place. I was of the opinion that teacher generated action was not worthy of a PYP classroom. The reason for this is that it simply wasn't meaningful to students if it didn't come from their own inquiry.

One of the readings that we were given helped me to move my understanding forward. It was a combination of sections from a book called Educating for Global Citizenship by Boyd Roberts. One part described a perspective of student participation that was defined by Hart's ladder of participation. You can see in the diagram below that there are eight levels. The first three are defined as non-participation and the top five indicate different levels of student participation. What this tool has helped me to realise is that, while we want our students to think, act and reflect independently, they need modelling to see what this looks like - just like anything else. It means that it's ok for adults to suggest and even initiate action in our classrooms and schools. 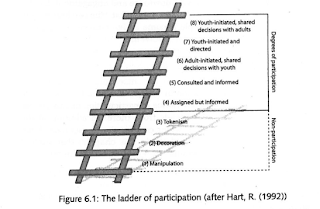 Seeing as we're inquiring into systems for our current UOI, my teaching partner in Gr. 5 and I decided that we would take advantage of a couple of authentic challenges that had recently arisen in our school community and see if the students could develop some systems that would help to solve them. We used Hart's ladder to identify where we landed in terms of student participation - to make sure that what we were planning was still considered as being participatory. We think we're at level six - Adult initiated, shared decisions with youth.

The two challenges that we posed to the students were (1) Find a way to organise, collect and store recyclable materials for use in our Maker Space (which is currently under construction) and (2) Develop a system that could help us organise how the students in Residence use the Branksome Hall Bikes (they were being left all over the campus and not being returned).

We then gave the students a lot of autonomy in the process. They could choose which cause they wanted to work for and collated their ideas with the other members in their group.  We thought is was important for the girls to recognise that once an idea was put on the table then it belonged to the group and could be improved on -  the girls were very good with this and, as a result there were some fantastic suggestions.  For the bikes group, some ideas included fixing GPS monitors to each bike and having them send information back to a central location (e.g. the security office) so that they always knew where each bike was; developing Branksome Hall Asia currency  that each student could use to pay a deposit on each bike they borrow; and creating a bike borrowing list that everyone had to sign up on before they could borrow. The Maker Space group wanted to create a commerical to be shown at Assembly so everyone could see what they wanted; they contacted journalism club to get them to write an article about our challenge for the school newsletter; and they are in the process of designing a Branksome Hall Asia recycling bag that will be given out free of charge to everyone at school to encourage them to bring in materials from home.

Although these ideas were initiated by the classroom teachers, it is clear that the decisions are being made by the students. They still have ownership over the action that they are taking and it is meaningful for them. Our hope as classroom teachers is now that the students have seen what this looks like then they will be able to initiate action of their own accord. They may still need more examples - and that is fine - the important thing is that they are involved as an active part of the process.
Posted by Dave at 3:02 PM