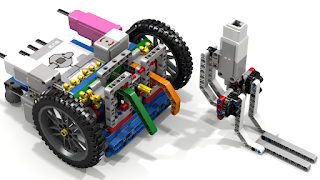 Over the past couple of years I’ve been randomly exploring what the future of education and learning might hold for us. Recently I’ve been dipping in and out of the book: The Second Machine Age: Work, progress and prosperity in a time of brilliant technologies by Erik Brynjolfsson and Andrew McAfee. This was published in 2014 so even now there’s a risk of some of the things mentioned becoming negligible. More on that in later posts.

The book begins by shedding some light on the title. The authors quote anthropologist Ian Morris (author of Why the West Rules - For Now) as he describes human societal progress. There have been some pretty major events and developments that most of us would consider landmark moments - things that have significantly changed the course of things. Domesticating animals; farming and agriculture; great wars and empires (Ottomans, Romans, Arabs and Mongols); philosophical leaders such as Confucius, Buddha and Socrates; the establishment of major faiths (Hinduism, Christianity, Judaism, Islam); systems of writing and number; Democracy, The Black Death, Christopher Columbus - the list goes on. It is difficult to single out one of these as being the most important. Different groups of people from different backgrounds will all have valid reasons why their choice should take the top spot. In his work, Morris aims to somewhat settle this argument. He developed a way to quantify what he calls ‘social development’. For an in-depth definition of his equation and the various factors that play a part, take a look at either his book or the 2nd Machine Age, which briefly describes it. In a nutshell, though, it’s defined as ‘a groups ability to master it’s physical and intellectual environment to get things done.’ The results of his work are, in a word, astounding. As the graph below shows, numerically speaking, almost everything mentioned previously hasn’t mattered all that much when compared to one other thing. The axis show social development graphed against total worldwide human population: 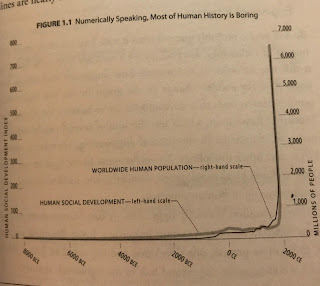 As you can see, progress was pretty much static for a long, long time. Until around 200 years ago when we see a dramatic shift. Something sudden and profound arrived which bent the curve of human population and social development. This was the Industrial Revolution and, more specifically, the steam engine developed and improved by James Watt. Prior to Watt’s developments, previous steam engine designs could harness about 1% of the energy released by burning coal. Watts’ design increased this by threefold and started us on the path to being able to overcome the limitations of muscle power and generate massive amounts of useful energy at will. This lead to factories and mass production, railways and mass transportation - the things we now recognise more commonly as modern life. Brynjolfsson and McAfee call this the First Machine Age - the first time that our progress was driven primarily by technological innovation. They claim that computers and other digital innovations are doing for our brains what the steam engine did for our muscles. This is the Second Machine Age.

The authors generalise three conclusions from their work:
(1) We are living in an age of incredible digital progress. The technologies that we experience as part of this are not new (Time magazine declared the personal computer its “Machine of the Year” in 1982). But just as it took generations to improve the steam engine to the point that it could power the Industrial Revolution, it’s also taken time for us to enhance and refine our digital engines.

(2) The transformations bought about by digital technology will be profoundly beneficial ones. Technology can bring us more choice and freedom in our consumption - information from books and friends, entertainment from superstars and amateurs, expertise from teachers and doctors to name a few. Economic historian Martin Weitzman claims that “the long-term growth of an advanced economy is dominated by the behaviour of technical progress”. Technical progress is improving exponentially.

(3) Digitisation is going to bring with it some thorny challenges. All benefits have challenges that must be managed and this will be no different. Technological progress is going to leave behind some people, perhaps even a lot of people, as it races ahead. It’s a great time to be a worker with the skills and education that allows you to use technology to create and capture value. Unfortunately, though, it’s not a great time time to be a worker with ‘ordinary’ skills because computers, robots and other digital technologies are acquiring these skills and abilities at an extraordinary rate. It’s important to discuss the likely negative consequences of this second machine age and start a dialogue about how to mitigate them. The problems won’t fix themselves but they’re not insurmountable.

With digital technology advancing into the realm of the stuff of science fiction, the authors stress that the choices we make from now on will determine what that world will look like. In future posts I’ll outline some of their research and ideas for the future. The implications for education could be monumental and I look forward to being a part of this.

Photo Credit: dluders Flickr via Compfight cc
Posted by Dave at 3:36 AM