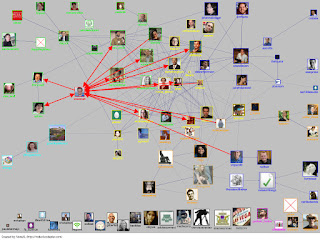 Yesterday I had the pleasure of catching up with a colleague who is currently on sabbatical as she completes a M.Ed (Music) degree in New York. She was back over this side of the world visiting some family and friends for her break before heading back to continue her studies. It was wonderful to hear about some of the projects she's been working on over there and how they might be put into practice when she returns to BHA next year.

One project that stuck in my mind was that of a game that she was developing as part of one of her courses. The basic idea is that as students play the game they are rewarded for improvisation based on a section of music that they are looking at. The idea here was to diverge from just replicating a set piece of music. Of course there are monsters involved too. In order for my colleague to get her idea off the ground she had to connect with a software developer and a game designer, which she found on campus. Together the three of them developed her idea and are at almost at the stage where they have a piece of software to work with. They're hoping to test it out in schools sometime throughout 2016. Their hope is that their product will be a point of difference as it will be able to be used by teachers with multiple students at a time (i.e. a class) instead of an individual app or game, which appears to be the norm with these sorts of products.

None of this would have been possible if they hadn't have worked together. My colleague isn't a gamer and doesn't know where to start when it comes to designing games. Likewise, the software developer and game designer aren't attuned to what it is like to be working with 20-30 six year olds on a regular basis. Without collaborating, the result would not be what it currently is. This is the sort of collaboration that occurs everyday in the 'real world' - multidisciplinary teams working together to solve ill-defined problems. It is not, however, the sort of collaboration that we always design in our classrooms. In many cases students are told that they have to work together with certain people, or are told that they need to be in groups of two, three or four. This is not preparing students for a life beyond school in the 21st century. Consider the PYP Exhibition - the landmark culmination for the final year of a PYP student's journey. How many times are students grouped together because they have a faint connection to something that they'd like to inquire into. 'Oh, you're interested in researching the migratory patterns of whale sharks? Great, we'll put you in the 'over-fishing' group'. Or, worse still, they're given a choice of things that 'they'd like to explore' and groups are formed that way. Collaboration in the Exhibition, or in any similar process, should be about students inquiring into their passions and, when they inevitably reach a point where they need something that they can't do for themselves, they reach out to someone else and work together with them. If they then go back to their individual work once that part of the job is done then so be it - this is a microcosm of life. Yes, in the real world you don't always get to choose who you work with. I've certainly worked with a range of different people that would not have been my initial first choice. Sometimes there are group members that simply don't contribute to the collective - either by choice or readiness. Sometimes there are learning styles or approaches to work that suit some more than others. Sure, these can happen. But ultimately I find that there is an element of natural selection that occurs with these sort of experiences and things are straightened out. Even if you are required to work with a group that you consider to be low-functioning, you are not bound by it.  There are a variety of avenues to access skills and knowledge in order to build your own understanding along the way.

The dynamic world that we live in means that it isn't feasible to expect one person to be able to manage complex tasks alone. Real collaboration requires every member of the group bringing something to the table that can be used to help the greater good. In terms of assessing this, there are structures that teachers can put in place that allow us to measure how well each person shares their specific information. This is 21st century teaching and learning.